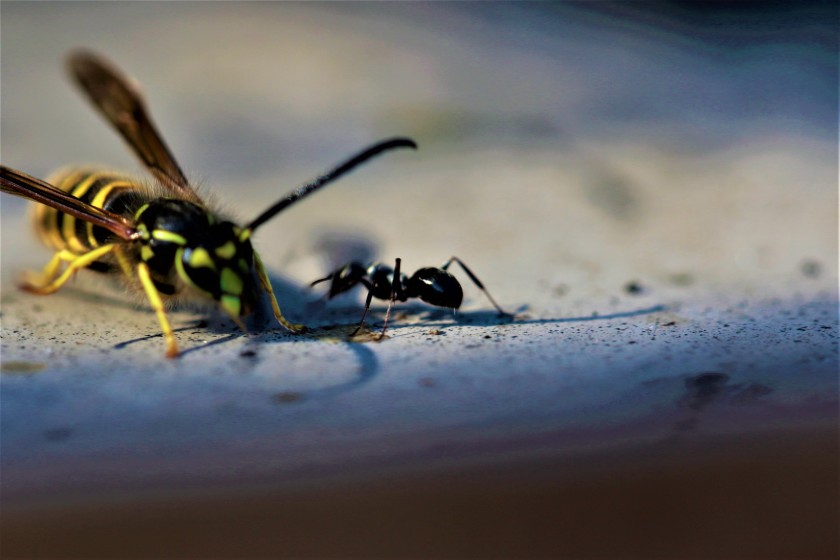 Melena Schulz stakes her comprehensive reputation that the insects in this photo are communicating a plan to disrupt a canola harvest somewhere in western Canada.

When Schulz graduated from the Dresden University of Technology with degrees in Forestry, Botany and Entomology, she was quickly recruited by the East German Stasi.

Her specialty in insect behavior led the Stasi to crack MI6’s bee communications programs in the 1970’s. She quickly advanced up the chain of command until 1987 when an advanced project to defoliate large areas of forested lands in Scandinavia, was rejected by the Minister of State Security.

Melena defected to the west, was employed for a time in Nitro, West Virginia by Monsanto as a ‘consultant’. She then went on to teach briefly at Dalhousie University and worked for a time at Nova Scotia’s Department of Lands and Forests.

When the International Native Species and Exotic Creatures Tribunal (INSECT) came knocking on her door to head up the organization, Melena Schulz was trained and ready.

Evangelical preacher Bokamoso Jacobs set up a mammoth tent outside Sun City, South Africa and was bringing in the faithful with his own brand of fire and damnation sermons.

The opulence of Sun City and the decadent pursuits of the visiting tourists, gave Jacobs plenty of fodder for his style of preaching. He often spoke of the sanctity and purity of gods creatures and to that end asked his flock, here and around the world, to send him photos of these magnificent creatures. The photo shown here was sent by a teddy bear from Northern Ontario, Canada.

An unintended consequence of this photo developed when agents with INSECT who were trolling the internet for random information, discovered that a usually inanimate teddy bear claimed to have sent this photograph. The agents immediately informed the ‘Exotic Creatures’ division of INSECT for further investigation.