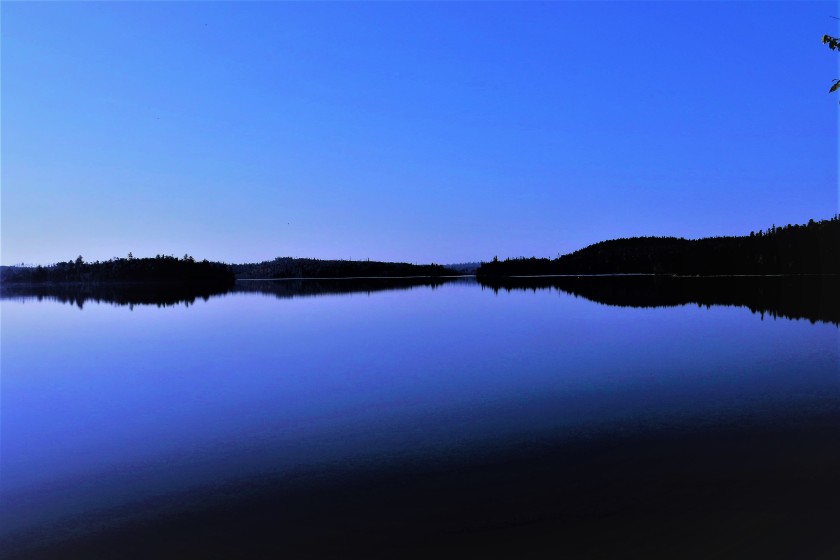 Sapphire and Cricket were slowly getting accustomed to the peculiarities of living with a teddy bear. Teddy bears use telepathy to instill life in other teddy bears and telekinesis to move around from place to place. All these psychological activities diminish the amount of time teddy bears remain sentient, but on the other hand teddy bears can return to their ‘teddy bear’ state and gain back some of the lost time.

Ellie has s state of mind she calls teddy bear country, which quite often is a physical place but at other times is a place of contemplation where teddy bears ponder their place in the great scheme of things. One of Ellie’s favorite pastimes is to disappear for days to different places in Northern Ontario and work on her fictional short stories. Ellie took this photo of the campground along Highway 144 where she completed her short story ‘Perfect Strangers’.

After a prolonged hike and an exhausting canoe trip, Beaver Falls counsellor Drake Johnstone finally set up camp in Lady Evelyn-Smoothwater Provincial Park, in Northern Ontario, Canada. It was a solo trip that Johnstone had planned for many years and he was very excited to explore the wilderness around him.

On his third night, while stretched out in front of his camp fire, he witnessed a bright light ascend through the cloud cover and hover over the dark lake. Johnstone jumped to his feet and ran toward the lake to get a better look at what he quickly realized was a space craft of some sort. As he backed away from the water’s edge, he saw no less than seven teddy bears starring at the alien craft.