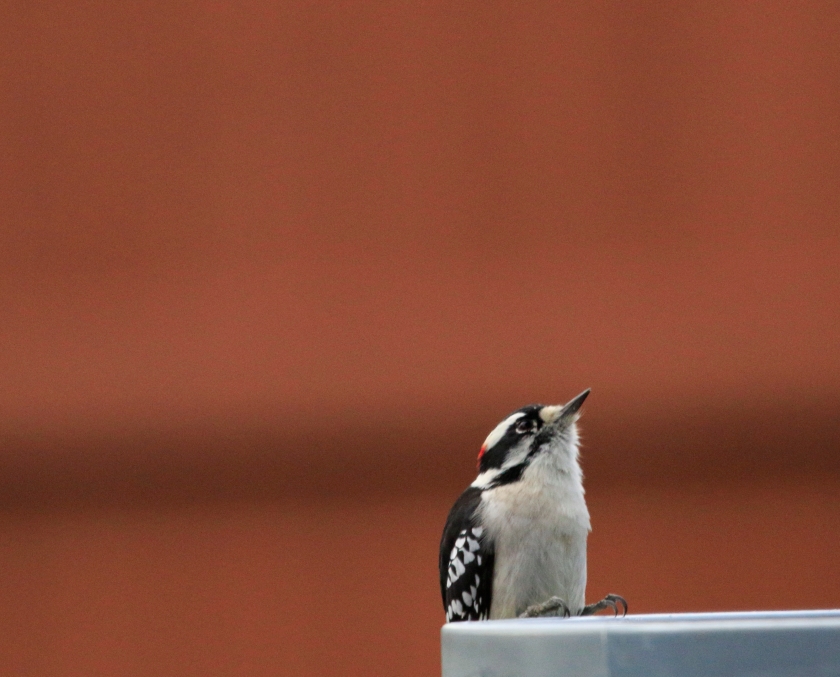 The downy woodpecker looked like he was about to make a life altering decision just like Bella and Dizzy made some months ago when they decided to halt the burgeoning space tourism program about to” take off ” in Canso, Nova Scotia.

After a couple of successful disruptions, the pair was laying low on a rust bucket tugboat anchored off Pirate Harbour in the Strait of Canso. Their two teddy bear co-conspirators were in the wind and a massive police presence blanketed Guysborough County looking for the women. Teddy bear chatter in the area, led INSECT agents to the tugboat, where local police devised a strategy to arrest Bella and Dizzy. Four officers left shore in a twenty foot rowboat in the dead of night with the aim of quietly boarding the tugboat and placing the women in custody. It was a simple plan that would have worked, had Miles Hobbson not shown up in a powerful zodiac creating such a large wake that it dumped the officers into the Strait. Hobbson then pulled alongside the tugboat, spirited Bella and Dizzy into the zodiac and vanished into the starless night.

INSECT had feeding stations all over North America studying the peculiar sounds chickadees made when teddy bears were active in an area. As with many discoveries, it is often the researchers looking in one area then stumbling upon something interesting in an entirely different area that leads to important breakthroughs. This was the case at a feeding station just north of Mattawa, Ontario where a lone INSECT PhD. student realized that downy woodpeckers would alter their pecking patterns when teddy bears were close by and to her astonishment, each pecking pattern was unique to an individual teddy bear passing through the area. The ramifications of this discovery could drastically alter the relationship between INSECT and all teddy bears.