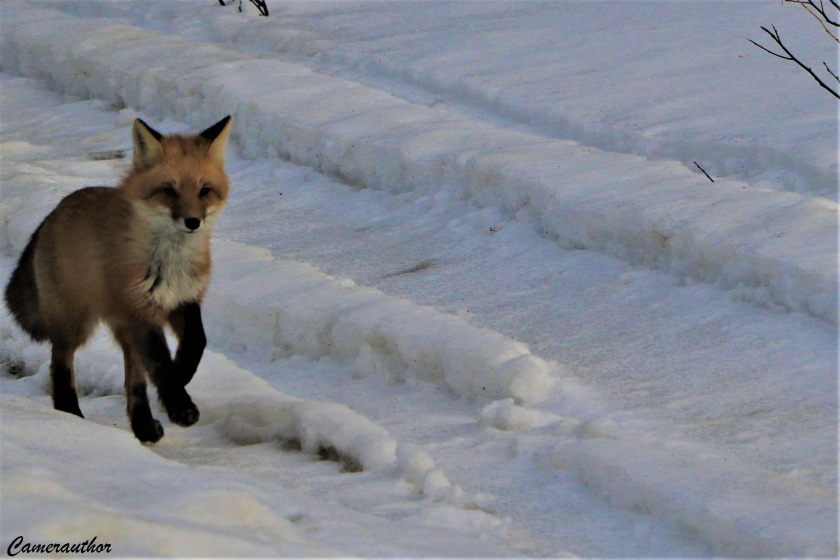 The one man snowshoe trail rambled through thick pine forests, crisscrossing a stream where the muffled sounds of fast flowing water could be heard even in the dead of winter. Two bird feeding stations caused the trail to exist and the trail’s designer would often be greeted by nuthatches, chickadees and finches long before arriving at the stations where the little beggars would demand seed payment before he was allowed to pass. A third reason for Drake Johnstone’s daily trip arose as the cold winter dragged on, that being his discovery of a fox den near the end of the trail.

After breakfast and with the cabin in a reasonable state of cleanliness, Johnstone would take the snowshoes off the cabin wall, don his parka and Sorel boots, fill his pockets with bird seed and bring along a touch of bacon grease for the fox. The trip took a couple of hours, faster now that the trail was well packed down from a winter’s worth of snow shoeing and now on most days the snow shoes could be discarded in favor of just boot walking on the hard surface.

Trail’s end was not far from where Johnstone left Schulz’s brief case and transmitter and he would occasionally find himself overcome by curiosity and venture to the site. As far as he could determine, the transmitter beeped away all winter long no matter how much snow piled up on it. As the month of March began to flex its warming muscle, Johnstone thought he’d have one last look before breakup, and as he closed in on the transmitter he could see a snow machine approach with two people aboard. Training his binoculars on the machine, Johnstone recognized one of them as Schulz and as he further strained to see an advancing helicopter, the pilot looked like his old political partner, Miles Hobbson.

The canoe kissed the smooth round rocks beneath the waters of the French River as Cinder Willoughby maneuvered the craft toward the shoreline so he could get a closer look at the fox den he’d been studying. Willoughby had already collared the female last week but was having difficulty with the reclusive male. His luck was about to change this morning as the male appeared only a few feet from the water’s edge to lap up a bit of water. Willoughby raised the tranquilizer gun and within moments the diazepam took effect, the fox was collared and he drowsily returned to his den.

Miller insisted he could wait no longer, Davis must pull over at the next bathroom, there could be no discussion, no stretching out the inevitable, because the time was now. Davis pointed to the French River Provincial Park sign and decided this would satisfy the twisting agent in the passenger seat. Miller jumped out, Davis popped the trunk, Miller grabbed his man bag and ran for the bathroom.

Willoughby’s radio signal suddenly went haywire, he tapped his laptop with no results, pushed a few buttons but the signal didn’t return to normal. He looked around the parking lot: two cars, a pick up truck, a van and a third car that just arrived, now with its trunk wide open. Willoughby did a double take as he thought he saw a little teddy bear head peaking out of the car’s trunk. Checking it out for himself, he walked over to the car but the trunk contained only what you’d expect, a spare tire, a jack and some personal items. Returning to his vehicle, Willoughby was pleased to find his radio signals had cleared up and he could get on with the business of tracking the foxes.