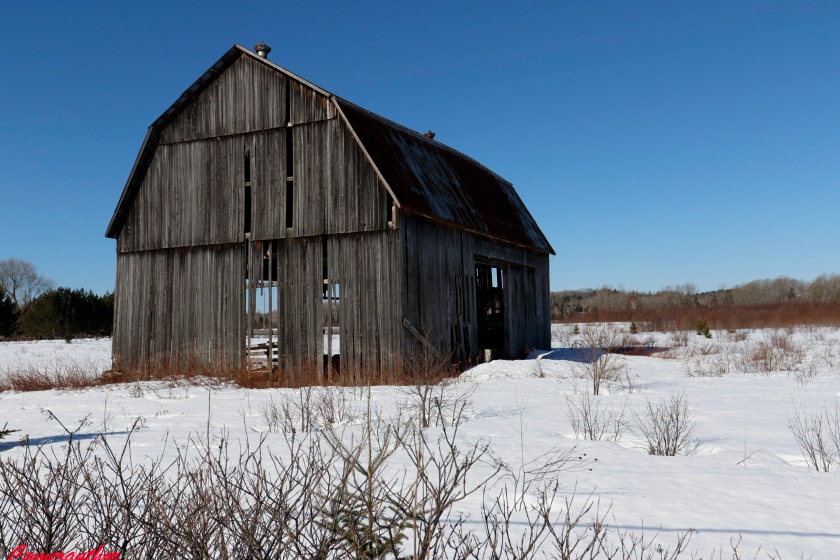 The snow came early on this once self-subsistence and now long abandoned farm located down a rarely used overgrown dirt road somewhere south of River Valley. Desperate and dirt poor men and women attempted to eke out a living from the land of rock and snow, but after a generation or two of this starvation lifestyle thousands of these homesteads became quivering tombs of memories, disintegrating in the howling winds and in the scorching sun and in the unending cold of winter. If the unforgiving soil didn’t collapse these souls, bank foreclosures and the burden of debt saw to their demise.

Today, the landscape is awash in dilapidated farm houses and barns that once promised hope. Hardy perennials and shrubs can still be seen growing beside crumbling foundations telling passersby that beauty once existed and is still possible and that farming dreams still swirl in the air along side the spring pollen. The barn door is now used firewood, as are many of the long straight boards that still give the structure its tangible appearance. When Feather arrived, she could look right through the barn and see the fields on the other side, but she had no time for melancholy and set straight away to opening the small treasure chest box in her possession. Three insects poked their tiny heads out of the box and flew high into the barn’s rafters.

He claimed to be an architect from the city of Ottawa, but it turned out he was a draftsman from Arnprior, but no matter what, George bought the old Douglas property a few kilometers from the Moose Lodge where Morley, the lodge owner, was glad to have a neighbour at long last. George stayed at the lodge a couple of times, leaving early in the morning to visit his newly acquired property, then returning in the evening for supper and sleep. On his third visit, George got it into his head that he wanted to tear down the barn, transport the wood to Arnprior and build an authentic replica of the barn as a tourist attraction. Being a busy man with a full time job, George enlisted Morley’s two sons to do the actual work. They could take all winter, as George was in no particular rush to see the project completed.

As an early October snowfall descended on the area, Morley’s sons were spending every second weekend at the barn and progress on the demolition was going well, until their arrival  on the first weekend of the month. Strange and unusual footprints appeared in the snow; these prints were like nothing the boys had seen before.

Morley called around and within a few days CO Micheals arrived confirming that he had seen these footprints only once before.