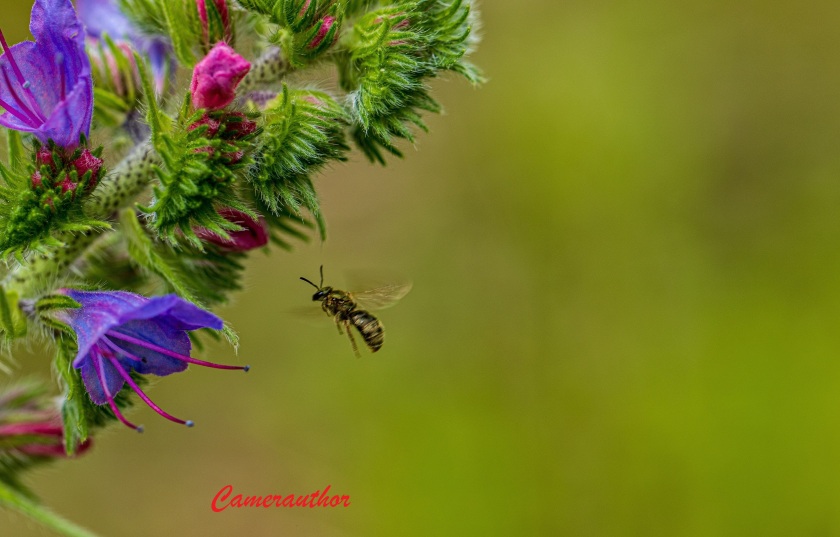 A nano mechanical pollinator, its single eye-like camera rotating in the middle of its head, sat in a nanoscopic hangar. Dozens of nanowires running from a nearby supercomputer  was checking and rechecking the bugs thousands of operating systems in preparation for its release into a Missouri corn field. With each successful test, the robot became more animated until the INSECT team was ready to launch. The nanobug rose smoothly from the hangar, surveyed the surrounding area methodically then bolted to the edge of the corn field to a patch of wild radish, wood sorrel and bugloss.

Insect researchers randomly chose a wasp at the edge of the field in which to conduct the nanobug’s first elimination experiment. With a simple computer command the unsuspecting wasp was dive bombed from above and a considerable but inconsequential piece of his abdomen was ripped away. The wasp immediately turned toward his enemy and jabbed his stinger into its underbelly but instantly knew it did not penetrate, so he grabbed the robot and attempted to devour its head but without success. The nanobug retaliated by body slamming the wasp then executing a quick decent on top of the disoriented wasp, pinning him to the ground. Just as the wasp’s thorax was about to be crushed, he summoned up the strength to flip the nanobug off and disappeared under some thick leaves.

The INSECT researchers monitoring the struggle where struck by the tenacity of the wasp, but of course they had no way of knowing he was a direct descendant of No.1. As the nanobug lingered a few feet above the corn field looking for its prey, the wasp silently crawled through the litter, coming upon a large sweetgum tree then ascending its  deeply furrowed bark until he was high above the ground. The wasp surveyed what was below him and saw a water filled mud rut created by the farm tractor. He waited for the nanobug to pass over the mud hole, and without hesitation he hurled himself downward, clutched his enemy in a death grip sending both plummeting into the murky water. The brief struggle that ensued gave way to some muted sparks, a whiff of smoke and the nanobug sinking to the bottom.

The stairway leading to the basement was dimly lit with a burnt out curly bulb at the top and a 40 watt at the bottom. The cement stairs in the century old building were cracked and crumbling and in the places where patching cement had been used, it only served to hasten the stair’s demise. The basement smelled of mold and the dampness penetrated everything within its walls. The keeper of this crypt kept everything wrapped in clear plastic bags, hoping this would keep all the nasty elements at bay.

In amongst the bankers boxes of legal papers, sealed bags of knives and guns, castaway items of clothing and endless envelopes of forensic reports two teddy bears were squished into a plastic bag and recklessly thrown above a storage cage in this evidence locker belonging to the local police department. Constable Mike, a soon to be retired police officer and the man in charge of this dank dungeon, was just about at his wits end with the three INSECT agents assigned to watch over the teddy bears and eventually confiscated the teddy bears when the trial of Bella and Dizzy was over.

Beersey and Buttsey had not been sentient for several months and were kept in the evidence locker in the off chance their presence might be needed at the trial.  But, with the trial now over and the sentences handed down, the INSECT agents were ready to claim their prize.

When Josh, Jack and Jimmy showed up on a Monday morning with two black velvet sacs in which to transport the teddy bears, Mike was up over the stairs and already outside with the teddy bears, ecstatic to be rid of the five thorns in his side. The agents did not notice the small wasp hold up under the lip of the car trunk and certainly did not know it was a gentle injection of wasp venom into a dormant teddy bear that brought it back to sentientism.