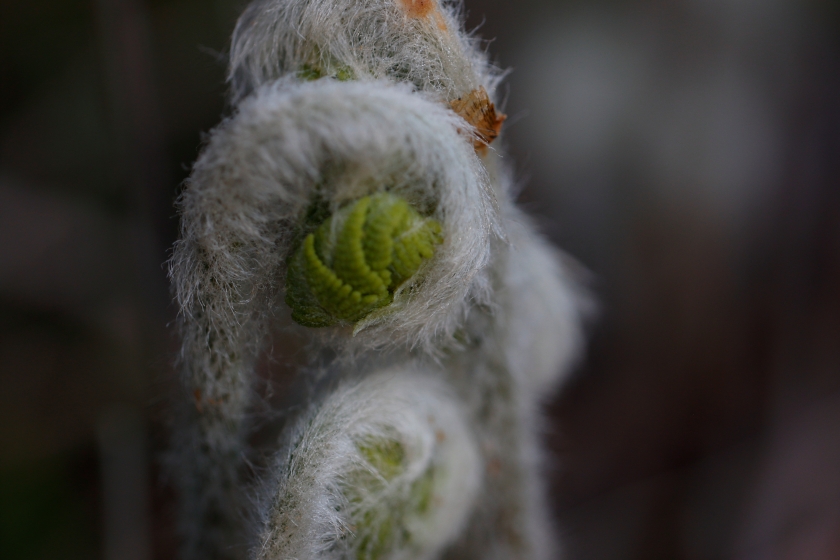 The chipmunks called it the ‘power of suggestion’ plant. They came across it at the edge of the Three Chipmunk Range and brought it back to the compound for further study. Sofia Zuniga was tasked with determining the usefulness of the plant and after several weeks of trials and experimentation, she noted it had mild psychotic properties and indeed seemed to cause actions based on suggestion.

In the weeks that followed a handful of teddy bears, six bumble bees, two dragonflies, one creature claiming to be from Mizar and two young women called on Sofia asking if they could get some extract from this new plant.

Theorizing how a society runs…elementary!

Speculating on a new world order…effortless!

Miles Hobbson found peace and tranquility near the now famous trestle, where he’d lie down against his favorite rock and watch and listen to the world roll by. As the newly minted mayor of Beaver Falls, he had a bucket load of promises to implement. As he watched a small fern in it’s early stages of development, he had somewhat of an epiphany…his term as mayor would begin with small steps not the grand gestures he spoke of during his campaign.

Mr. Song was the keeper of a magnificent waterfront property on Lake Ontario, not far from Tommy Thompson Park. Mr. Song was a close friend of Mildred Duck and when he heard of Mildred’s upcoming production, he offered the cast and crew the property to use as their staging area.

Mildred was grateful for her friend’s generosity and on their second evening Mildred planned an elaborate wild rice dinner for Mr. Song and anyone he wished to invite. The meal was a great hit, and everyone was enjoying themselves until a loud argument broke out between Mr. Crane from the troupe and Mr. Song’s nephew who just flew in from Lake Tomiko. It seems the free- spirited nephew and the strict discipline of Mr. Crane resulted in the loud disagreements on just about everything.

Margaret Brookside’s experience with office administration, her attention to detail and her ability to work independently made her the obvious choice to scan the hundreds of aerial photos taken by Mutt Jefferson’s swan.

After being released from her duties at the mayor’s office in Beaver Falls, she would spread several hundred photos out on the floor of her office and carefully study each one looking for anything that might stand out.

It was painstaking work, with little reward. For five days Margaret diligently reviewed the photos brought to her by Slim Clemons’s private investigators. When she studied the photos covering the trestle area she was familiar with, the aerial views she was now looking at displayed unusual patterns in the fields surrounding the trestle. The trestle appeared as if it was the center of a spider web, with tentacles shooting off in all directions, many interconnected to one another.

The Amtrak train nearly derailed as it approached Beaver Falls, but a quick-thinking engineer recognized the impending danger and brought the train to an abrupt halt. The inevitable stopover saw Cricket and Sapphire take a taxi to a riverside restaurant in the heart of the downtown.

While sipping on a Niagara Falls ice wine, they spotted a young man sauntering up to a streetlight pole and paste a document around its considerable girth. Interested, Cricket walked over to take a look and came back with the news that Miles Hobbson was in town and giving a talk that evening at the public library.

Cinder Willoughby felt a little bit like Dylan’s Mr. Jones as he peaked into the library’s auditorium. It was filling up quickly when Cricket and Sapphire accidentally brushed up against him. They recognized one another, having crossed paths before, and decided to sit together near the back of the hall.

Miles started his talk by recounting his encounters with alien life on Nevis, but his musings soon turned to more terrestrial subjects. He had a political and social platform he touted, and his popularity within the audience quickly grew. “If…IF we dodge the carbon bullet, human overpopulation will destroy the planet.” “Who is responsible for habitat loss around the world?” “Who causes massive islands of plastics in the oceans?” “Who is responsible for the toxic air and polluted lakes?” “Who partakes in hyper-consumerism then overflows our landfills?” His followers answered Hobbson with a resounding “WE DO…after each question. Spurred on by the audience, Hobbson spoke of pursuing  negative GDP instead of a positive GDP, of banning all cars (gas,electric, and hydrogen) from the inner cities. He advocated for smaller sewer and water systems to accommodate a smaller population. He pushed for local organic farms to feed the smaller populations and design neighbourhood solar and wind projects to produce electricity. The believers went wild when Hobbson stated the planet’s CARRYING CAPACITY was FINITE, and the idiots running the show better soon realize it.  After a standing ovation, Hobbson swore he would carry his message far and wide.

Cricket, Sapphire and Cinder were genuinely surprised at the enthusiasm the crowd showed toward Hobbson. They watched with perplexed interest as the converted audience rose again from their seats in response to Hobbson’s grand gestures. As the evening grew to a close, the trio slipped out a side door before the mass exodus began.

Graham and Smith spent copious amounts of time together and to relieve the tedium they often spoke to one another as if they were pirates. “Fetch me coffee. Matey!” One might say, “ I…it’s as hot as hades,” the other would reply. This banter could go on for hours.

Pirate talk was in full swing when Graham and Smith sat down for lunch at a downtown riverside restaurant in Beaver Falls. It all started innocently enough, a lone raven sat on a canopy and began a loud monotonous squawk. A blue jay chimed in, a bull frog had its say, and a snowy owl hooted from a perch nearby. Dragonflies, bumblebees and yellow jackets lay siege to the restaurant and within minutes customers were in a panic, heading for the streets away from the river. Like the others, Graham and Smith were exiting the establishment when Smith slipped on the hundreds of perch that had jumped from the river and were flopping around the restaurant’s deck. Graham quickly ran to Smith’s aid, they both went down hard and fell into the river. As fast as all this began, silence fell over the area, leaving Graham and Smith to survey the damage as they stood in waist high water.

Unlike the human Olympics, the canine Olympics take place every year for four consecutive years then takes a four-year hiatus so that new athletes can begin training. With that in mind, this Beaver Falls canine didn’t have much time to lament his defeats in the high jump and the hundred meters when he was pressed back into training.

The United States Canine Olympic Committee decided on a rigorous training regime to prepare this dog for Canine Olympic Style Wrestling. Pictured here is his diminutive but tenacious trainer showing our Olympian the finer points of the sport.

It was a true breakthrough in rail safety when Amtrak hired and trained two Beaver Falls dogs, Chuckles and Jasper, to walk along the Amtrak rail lines looking for track defects and any other safety concerns.

It was a great disappointment when Amtrak officials announced that the pair would be laid off due to declining revenues and smaller passenger volumes.

Chuckles took the news particularly hard, but after a spirited donnybrook with Jasper both dogs felt better and vowed to secure employment elsewhere.

The newly formed task force made up of the RCMP and the FBI has welcomed United Kingdom’s MI6 into the fold and the new organization is now known as INSECT (International Native Species and Exotic Creatures Tribunal).

In its first significant break through, INSECT released this photo of one of the culprits they believe participated in the kitchen attack at the Fisherman’s Wharf in San Francisco. It is INSECT’s contention that this dragonfly used its wings to prop open of a ceiling exhaust fan allowing throngs of other insects access to the kitchen area.

The missing student, daughter of a Beaver Falls counsellor Drake Johnstone, was on a field trip with her entomology class when she was reported missing. As darkness fell and panic was setting in, a rookie patrolman spotted this dragonfly hovering and darting repeatedly over a rock outcrop. Curious, the patrolman went to where he observed the dragonfly and found the girl, tired but unharmed.

Coincidentally, when a pilot of a small aircraft who recently rescued the mayor of Beaver Falls was asked how she found the mayor, she simply replied; “ I followed the dragonflies.”

This is why I call my sister the Queen of the Coincidence. Sapphire thought her eyes were playing tricks on  her, but it was indeed the Governor of Pennsylvania pacing back and forth on the dock along the shores of Lake Temagami. He was talking it up to local pilot, Samantha Gallant about getting the Beaver aircraft aloft and start looking for members of his fishing party that were lost somewhere in the bush.

Samantha was trying to impress on the Governor the need for an experienced spotter when Sapphire rushed to the dock, pulled out her high-powered binoculars and volunteered to help out. The Governor said they were looking for two US senators and the mayor of Beaver Falls.

The deHavilland Beaver, considered the backbone of the Canadian Forest Industry and perhaps the safest small aircraft ever made, stalled out at a couple hundred feet. Sapphire took this photo as the plane attempted a forced landing on Lake Temagami.

I told Cricket that six weeks of therapy was no where enough sessions to fix his fear of heights, but my brother insisted he could handle it. At exactly 9 am Cricket started his accent of the Temagami Fire Tower.

It was a painful two hours watching what others would accomplish in fifteen minutes, but finally he made it to the top. Once there, his acrophobia kicked into high gear and there was no getting him back down.

Emergency Services had two real emergencies to deal with, so it was eight hours before they arrived on scene and escorted Cricket painstakingly down to solid earth. He did manage to take this photo before the long descent began.

Cricket and I often take the Amtrak to Washington DC to listen to the annual speech delivered by the head of the National Parks Service. On one such trip, we were delayed in Beaver Falls, Pennsylvania.

We wandered around the beautiful town for a couple of hours when we came across a well attended picnic of civic dignitaries.

Cameras in hand, we asked the gathered folks if we could take a photo of all the Beaver Falls officials. After a few pictures, we realized the town mayor was absent from the festivities and were told by the town treasurer that the mayor was rarely seen in public and disliked having his picture taken.

Some weeks later, a plain brown envelope containing this photo arrived at our Wahnapitai home.

Parks Canada recently enlisted the services of several Canadian beavers to help in the detection and elimination if invasive species throughout wetland areas in Canada.

After several weeks of intense training at the National Bird and Mammal Institute in Ottawa, Ontario, Canada, these beavers are assigned to various areas around the country.

The beaver in this photo is assigned to the Georgian Bay area of Ontario and has a specialty in detecting purple loosestrife and dam building.

WHAT IT IS/WHAT IT IS NOT
Blog at WordPress.com.