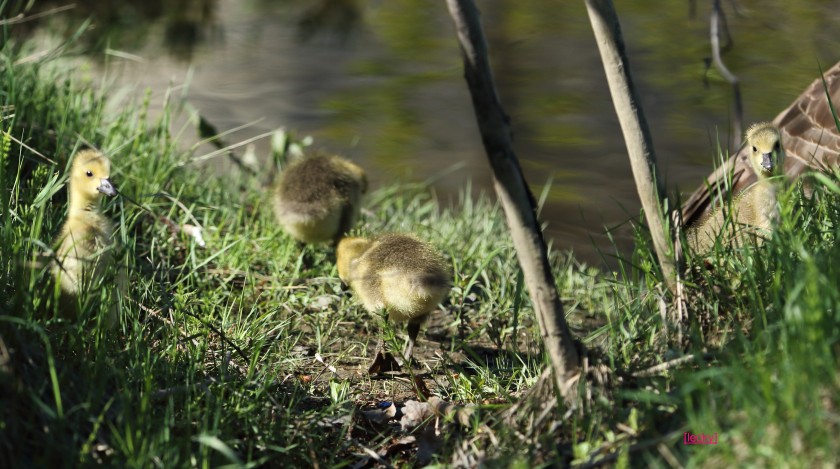 Bringing a throng of young geese to Toronto was not out of the ordinary for Mutt Jefferson. An ample seed mixture, some fresh lettuce and carrots, plenty of fresh water and secure pens filled with straw was all Mutt needed to get the gang to the big city.

For the most part it was an uneventful trip, except for one minor incident. Mutt was rolling down Hwy.69, an ancient roadway where two lanes of traffic travel in opposite directions. As he crested a hill, a black Hummer travelling at break-neck speed, was in Mutt’s lane and the two vehicles were closing fast. Mutt had no place to go, so he held tight onto the steering wheel, while the Hummer veered to the right onto the paved shoulder, kissed the guard rail and spun out from behind Mutt’s trailer, and kept going north.

Mutt figured the little cargos he was carrying may have freaked out a bit, so he pulled over to a stream along the side of the road and let the goslings out for a quick swim.

Margaret Brookside could see two young women from her vantage point a few hundred feet from the trestle. While one young woman waited on one side of the trestle, the other disappeared, returning moments later with a gosling. This happened again and again until thirty or more goslings playfully wandered and swam around the waters running below the trestle.

What happened next was strange indeed. Six teddy bears appeared carrying a body; a body Margaret recognized as patrolman Ned Doucet of the Beaver County Police Force. The body was carefully laid out in the tall grass and the two women levitated a glowing orb above Ned’s head. Within a few minutes Ned drowsily came to life and the two women and six teddy bears slipped below the trestle and disappeared.