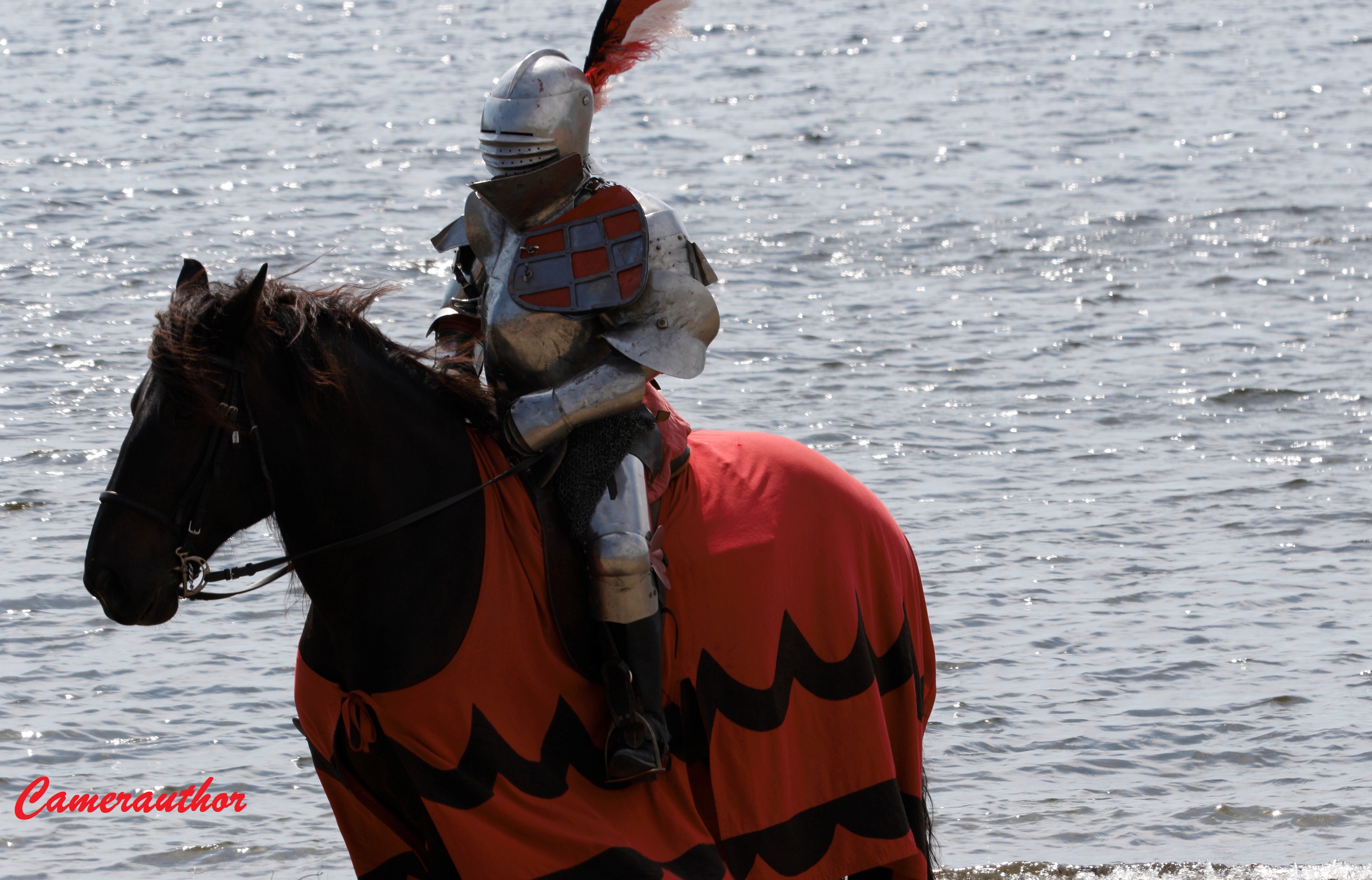 Mutt Jefferson’s eighteen wheeler was full, front to back, with pancake mix, pancake syrup and simulated blueberries destined for Boston Massachusetts for a grand Paul Revere celebration. Mutt left PEI in the late afternoon and was closing in on Portland Maine when the big rig’s drive wheels locked up, but Mutt managed to pull over to the side of the road and into a motel parking lot without incident.

Mutt had the entire rig meticulously examined a thousand miles ago and was perplexed that such an occurrence could happen now, but still he felt obliged to check out the problem in the unlikely event he could fix it. Mutt kind of pushed on the tires, tapped on the wheel nuts and pulled on the leaf springs before nearly jumping out of his skin when he turned around to walk to the motel office and found himself face to face with a knight in full regalia.

No.1, the next No.1, crawled out from behind the warm exhaust pipe and watched as Feather reached into her saddle bag and pulled out and opened a small chest-like box. No. 1 floated and dropped like he was descending stairs until he was suspended over the box. His head twisted in Mutt’s direction and he was soon centimeters from the truck driver’s eye.

Mutt was captivated by the thousands of ommatidia in No.1’s two compound eyes which reflected a chaotic newsreel-like account of what Mutt first believed was the insect’s life, but the scope and enormity of what he was seeing made him think the representations in front of him may well be of all insect life. Mutt both coaxed and rejected human emotions from these observations and stood firm in his belief that self awareness, purpose, agony and contentment could not belong to this creature in front of him. There was a message being conveyed but Mutt was ill equipped to answer the question that was the message. The dark elevator in No. 1’s eye was filled with the desperate being dragged down by the superpower of human achievement, and the swirl of the tornado inside would not let go of its grip on anyone within its reach. There was no end to the mayhem except for the paradise of the unaffected and that paradise was transient and uninspired. The generations accumulated into mountains of science and technology, education and entertainment, death and destruction and through it all the light of consequence randomly came on and off until it simply stayed on all the time.

No.1 disappeared into the box sitting on Feather’s lap, his story taking only seconds to reveal. When the horse reared to move, Mutt asked where they were going. Missouri was Feather’s brief reply.

Mary Sampson sat on a shiny metallic steel bench overlooking the Ohio River in Evansville Indiana trying to figure out exactly what the bench was made of. She allowed the palm of her hand to press hard against the seat then gently rub the smooth surface; copper she decided. Her sight was nearly gone but she could still make out the blue waters of the river and an interesting silhouette of what she believed was a knight sitting on a horse, but when the silhouette moved toward her, panic and fear quickly overtook her.

Hammer’s deep, reassuring voice eased Mary’s apprehension and the gentle approach of the Polacka further put Mary at ease. She stroked the Polacka’s white, curly locks and marvelled at the texture of the fur, a texture she had never felt before, owing to the fact that only one Polacka is known to exist.

Once Mary was calm and trusting of them, Hammer got down to business. He had been told by the translucent man that she had been chosen to Polacka-sit his pet while he was sent off to Missouri on a most urgent matter. For her part, Mary recalled the translucent man giving her a bouquet of lupins and telling her she had been chosen, but she hoped the event would be much more than pet sitting. Nevertheless, Mary agreed to take the Polacka to the nearby hostel where she was staying and await the knight’s return.